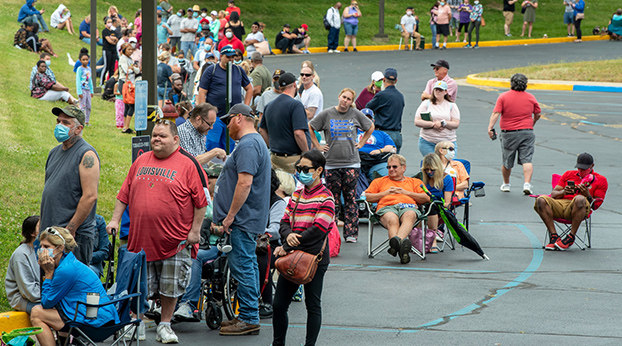 For the first time since 2017, regional Kentucky Career Centers in 13 cities, opened their doors on Thursday for in-person services, to help Kentuckians file for unemployment insurance benefits and resolve issues existing claims.

Unemployment insurance claimants with ongoing claims issues can receive in-person assistance at any of the 13 regional KCC sites.  The next round of appointments available for the period beginning May 3 can be scheduled Monday, April 19 on the Kentucky Career Center website, kcc.ky.gov.  Additional appointment times are expected to be added each day thereafter.

“When you combine years of painful staffing cuts, an out-of-date system designed to tell people no, and the effects of a once-in-100-years pandemic, many Kentuckians have been unable to obtain benefits,” said Gov. Andy Beshear.  “In addition to taking any new actions to help Kentuckians in need, we are now making good on our promise to begin putting unemployment specialists back into the local career centers.”

Anyone who is going to the regional centers must observe social distancing practices.  Among them:

–Remaining in a vehicle until 5 minutes before their appointment.

–Providing a photo ID, agreeing to a temperature check, and answering COVID-19 safety questions
before entering the building.

–Wearing a mask at all times.

The Labor Cabinet adds while staff will make every effort to answer all questions during this appointment, UI specialists may not be able to provide a resolution during a single appointment.  Some claims could require additional paperwork or take additional time to complete.  However, an additional appointment will not be necessary.

Another issue UI officials have had to overcome involved cyberattacks on the state’s unemployment insurance system, which led to significant steps including shutting it down for four days, starting last Thursday.

“These are unavoidable steps,” said Gov. Beshear.  “They are not brought on by the speed of processing, they are brought on by the sophistication of criminal attacks themselves, and the fact that we cannot be sending money to these criminals.  The number one issue we now face in UI is the level of fraud and crime.”

He noted it is hard to find the real claims when they are covered up by the number of fraudulent ones.

UI systems across the United States have become targets of massive fraud, according to Amy Cubbage, the governor’s General Counsel, who is the point person on the UI issues.

“Most of the fraud in the past has been one-off kind of fraud, where someone files and they lie about why they were discharged,” she said.  “This is organized fraud, often cybercriminals, who are located overseas.  It includes filing fraudulent claims and has now moved into attempts to break into existing accounts and stealing the benefits that are being awarded to proper claimants.”

Kentucky had more than 200,000 attempts at fraudulent claims, in February alone, according to Cubbage, so changes to the system included changing PIN numbers from four to eight digits.

There have been no new reports of issues since the system reopened on Tuesday.