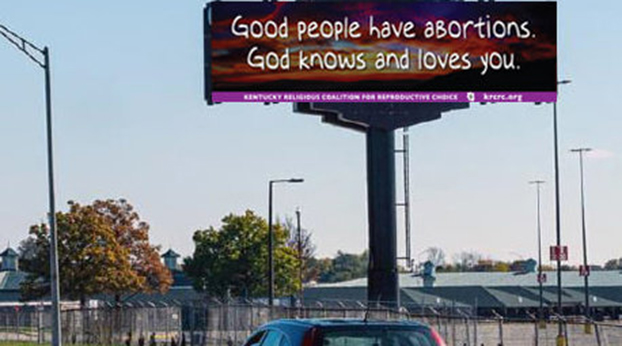 A group that supports abortion will be taking their message public over the next two months.

The Kentucky Religious Coalition for Reproductive Choice is paying for digital billboards around the state that will be displaying messages affirming that a person of faith can be pro-choice. The billboards will be up starting Monday, April 19, and continuing for eight weeks.

“For too long, America’s religious right has dominated the discussion about abortion, shaming women and telling them that abortion is a sin,” said Rev. Diane Snowa, a board member of the group and spokesperson for the campaign. “The Kentucky Religious Coalition for Reproductive Choice wants Kentuckians to hear a different truth: Abortion is a very personal decision, between you and God. Good people have abortions; God knows and loves them.

“For many Kentuckians who have had an abortion – a medical procedure one in four American women will have had by age 45 – this may be the first time they’ve ever heard anything other than that God would disapprove,” Snowa said. “Our message is of a loving God who understands, and who offers free will. Those choosing abortion deserve compassion and love, not shame and harassment.”

A GoFundMe page has more than $8,000 of the campaign’s expenses, with more than 100 donors chipping in to see the billboards become reality. The total cost is $12,000. They will be in Louisville, Nicholasville, and Paducah.

Not everybody is pleased with the messages on the billboards that will say, “Walk in my shoes before you judge my abortion,” “Good people have abortions. God knows and loves you,” and “Abortion: a personal decision between you and God.”

“Promoting elective abortion is the antithesis of human flourishing. Abortion minimizes the value of human life and leaves heartbreak, guilt, and sorrow in its wake.”

“Kentucky Right To Life has always been and will always be unwavering in our support and love for mother and her child. We believe one cannot love the woman without loving the child. God is the author of life and our mission and pro-life work reflect God’s love. We bear witness to God’s love, recognizing the dignity and the intrinsic value of every life from conception to natural death.”

Kentuckians will have the opportunity to weigh in on the abortion issue in the November 2022 general election as the General Assembly passed legislation known as House Bill 91, which is a proposed constitutional amendment on abortion, earlier this year.

Its language is simple: “To protect human life, nothing in this Constitution shall be construed to secure or protect a right to abortion or require the funding of abortion.”

Rep. Joseph Fischer, R-Ft. Thomas, the sponsor of HB 91, explained why it is needed. “We’ve worked on this bill for over a decade, actually, and we were finally able to get it through both houses this time. We’ve passed a lot of great pro-life legislation over the past four years, but it’s meaningless unless we have people who will enforce it, and courts who will uphold these laws.”

The reason it won’t go before the voters this year is that there are no elections in 2021.