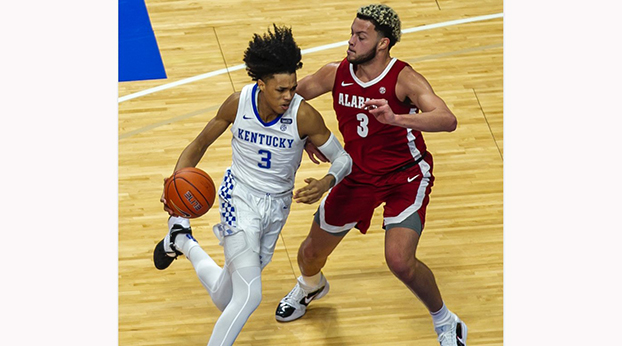 Kentucky's BJ Boston races up the floor against Alabama. The highly regarded freshman has struggled to find consistency during a 4-9 season. (Kentucky Today/Tammie Brown)

BJ Boston is doing all he can to get back on track.

The Kentucky freshman guard has been spending extra time in the gym after coming off the bench for the first time in his career earlier this week in a 63-62 loss at Georgia. He was working out past midnight Friday with teammate Cam’Ron Fletcher.

“Basketball is really all that’s on my mind, so it’s really the only thing that helps me escape reality,” Boston said Friday. “So, I just went in there at midnight (Friday). I left around 2:30 a.m.  just putting up shots … I’ve been struggling, but I’ve just been staying positive and staying in the gym working my tail off and just keeping up good spirits knowing that I’ve been having a rough start. But everything is going to change.”

The Wildcats (4-9, 3-3 Southeastern Conference) have lost three straight, including a heartbreaking 63-62 setback at Georgia Wednesday, going into Saturday’s contest against LSU. In the loss to the Bulldogs, Boston came off the bench and led all scorers with 18 points.

Although it was the first time in his college career Boston hasn’t started, the freshman guard said it proved to be a learning experience 13 games into his collegiate career.

“I feel like I could see the game before it happens just watching my team go out there and start the game and just cheering them on and bringing the energy when I got on the court,” he said. “But it really didn’t affect me coming off the bench or starting. I still bring the same energy and same confidence with me.”

Boston leads the Wildcats in scoring with 12 points per game but has struggled at times. He admitted it wasn’t the kind of start he envisioned to open his collegiate career.

“This season has been a rough season, a rough start,” he said. “(It’s) not really what we wanted, but it’s the cards we we’ve been dealt. We’re working hard every day. Cal is on us every day just trying to teach us to be better and a better group of men and a better team. We’ve just got come together and fight every game now.”

Boston said he’s making the adjustments and getting used to the faster pace of the college game, especially when it comes to dribbling.

“(I’m) just taking extra dribbles when I don’t have to,” he said. “(I’m working on) just getting downhill and finishing strong. Don’t flip the ball. Just try to dunk it every time I go in there and just go in there and attack the rim hard.”

He added that he doesn’t pay attention to his statistics and is more concerned about his overall confidence on the offensive end of the court.

“I don’t really pay attention to the numbers,” he said. “I just have a lot of confidence in myself that I know the next shot I shoot is going to go in.”

Kentucky assistant coach Joel Justus said Boston is improving on a daily basis despite his struggles this season.

The outing at Georgia. Boston said, gave him more confidence moving forward, but he was disappointed as the Wildcats surrendered a six-point lead down the stretch in the narrow setback to the Bulldogs.

“I feel like I could have done more to help my team come out with a win,” he said. “That’s the main goal is obviously to win the game.”

Boston said the Wildcats are down but remain confident.

“I wouldn’t say we’re discouraged,” he said. “Obviously, everybody would be mad with this kind of record. We should be better, but I feel like we’ve been putting the hard work in. We’ve just got to keep our heads high and keep going.”

Keith Taylor is sports editor for Kentucky Today. Reach him at keith.taylor@kentuckytoday.com or twitter @keithtaylor21