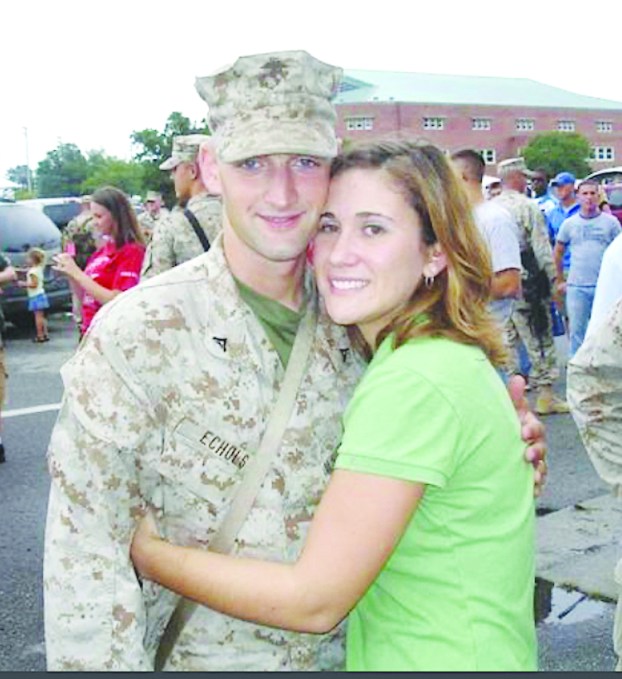 Ally Echols with her husband, Tom, before he was deployed. He was killed in Iraq in 2006.

Ally Echols grew up a Kentucky fan in Shepherdsville and met her husband, Thomas Paine Echols, a few months before he graduated high school there.

Tom Echols, who was a year older, was from a military family. His father was in the Coast Guard and he had numerous other family members who had been in the military. His older brother joined the Marines when he graduated high school and Tom did the same in 2004.

“He was a military brat and was always interested in the military and knew that’s what he wanted to do,” Ally Echols said.

She graduated in 2005 when Tom, a Michigan native who moved to Kentucky at age 10, was on his first tour in Iraq. He came home in October of 2005 and they were married. He got orders to return to Iraq in 2006 and deployed in September. She found out a week before his deployment she was pregnant with their daughter, Julia. However, he died Dec. 4, 2006, about five months before Julia was born.

“It was kind of ironic her birth ended up being the day his unit got home from Iraq,” Ally said. “Tom was in Ramadi, one of the world’s most dangerous cities in 2006. If Tom had to go, that’s how he would have wanted it. He loved being in the Marines. They (other Marines with him) were his best friends. He would not have wanted to go any other way.”

Ally Echols now lives in Elizabethtown — a block away from her sister and her children — and was running on a treadmill one day when Kentucky was playing football on TV. That’s the first time she heard the name Brandin Echols, a UK cornerback.

“I was more focused on running and breathing but thought, ‘Did I just hear my name?’ Echols is not a common name. I looked it up and it was so cool to hear your last name said correctly on national TV and he turned out to be such a crucial player,” Alyson Echols said.

Several family members and friends have memory bracelets honoring her husband. Some had broken and she was ordering more recently when her daughter, Julia, suggested sending one to Brandin Echols.

“I did some research to see if we could get one to him,” Alyson Echols said.

She reached out to Susan Lax, director of athletic communications and public relations for UK football.  Within 24 hours, she heard back from Lax.

“She gave me her personal information, so it was pretty easy to get the bracelet to Brandin,” Alyson Echols said.

Ally was watching the Gator Bowl on what would have been her husband’s 35th birthday with his sister when Brandin Echols flopped to help draw a personal foul penalty on North Carolina State. She loved it.

“Tom’s sister and I laughed until we cried when he got pushed and flopped,”Alyson said. That was something Tom would have done. He was a goofball just like that. We were hysterical.”

Brandin Echols made it clear before the game he was honored to be wearing the memorial bracelet of Tom Echols.

“I want to thank Thomas Paine Echols and his family for allowing me to support him and wear his wristband. It’s a big honor,” the UK cornerback said.

It was also a gesture that Ally Echols and her family will never forget.

“Any opportunity I get to where people can learn about him and his name, I’ll do it. That’s how you keep people alive.  Just tell their story,” Ally Echols said. “These men were husbands, fathers. Any chance I get to share Tom’s story, I will. I’m just so appreciative UK and Brandin were willing to do this for us.”