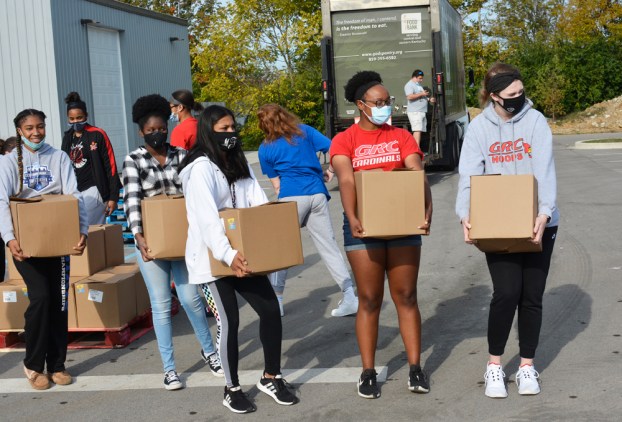 The GRC girls basketball team, shown helping deliver food to people in need earlier this fall, is under quarantine because of COVID-19. On Nov. 19, the KHSAA Board of Control postponed basketball competition until Jan. 4 because of the virus.

Almost as soon as the Clark County school board approved the district’s middle and high school game plans for winter sports, the Kentucky High School Athletic Association announced a change of plans.

Because of the surge in coronavirus cases, basketball, swimming and other winter sports won’t begin until Jan. 4, the KHSAA Board of Control decided in its meeting Nov. 19.

In accordance with the governor’s executive order issued the same day postponing in-person classes until after the holidays, the athletics board also ordered that practices for all indoor interscholastic sports be discontinued until Dec. 14.

That board will review the calendar for winter sports at a follow-up meeting Dec. 10, KHSAA said in a press release.

That evening, the Board of Education met online and approved 5-0 the proposed winter sports plans for George Rogers Clark and Robert D. Campbell Junior High School.

The plan for GRC approved Nov. 16 had divided the seasons for basketball, cheerleading, dance, and swimming and diving into three segments with rules for each to protect against the spread of the virus.

For example, the high school basketball season’s Segment 1 would have ended Dec. 18, Segment 2 would have been Dec. 19 through Jan. 31, and Segment 3 would have begun Feb. 1 and continued through district competition.

The plan also included tiers of those attending, with Tier 1 being essential participants such as athletes and coaches, officials and security, Tier 2 being preferred, such as limited media, band and cheer, and Tier 3 being spectators and vendors, limited to 15 percent capacity and a maximum of 750 spectators.

Now most or all of that has gone out the window.

Jamie Keene, the district’s director of athletics, said Friday that the administration had already decided to call off practices until Nov. 30 because of the Clark County Health Department’s data regarding COVID-19 cases, but the KHSAA decision confirmed that decision.

“Once we saw they moved the games back to Jan. 4, that’s when we decided we’ve got some time on our hands, let’s just all take a break,” he said.

Games previously had been scheduled to begin Nov. 23-24, he said.

He said there had been no competition yet for other winter sports, including archery, bowling and bass fishing.

Included in the plan approved by the school board is a statement that Clark County will follow KHSAA guidelines and recommendations, so the plan will change depending on what the state association decides to do.

Although school board members met from home Monday night using the app Google Meet, a few members of the public were allowed to come into Central Office and address the board by speaking into a video camera. The meeting aired live via YouTube and was recorded.

Among the speakers was Shawna Johnson, whose two sons play basketball. One is a senior at GRC and the other a seventh-grader at RDC. She implored the board to allow the teams to play.

“I would like for you all to please put aside your personal agendas and opinions and have a discussion with each other and to basically let these kids have some time of normalcy. Sports are important,” she said. ‘Please do not cancel it altogether.”

During the board discussion, member Scott Hisle took issue with a provision in the plan to restrict spectator seating to upper arena, and he asked whether there couldn’t be some lower arena seating.

“My reasoning is that if we force them all into the upper arena, then we’re going to increase the density there and we might not truly be achieving the 15 percent density goal,” Hisle said. “But certainly, I want to keep our student athletes safe first and foremost, and the coaches.”

Keene said he and others would like to keep the lower level free from spectators, but there’s a section that says if there’s a game where attendance is close to the 15 percent capacity, then “we do have the ability to pull out a section of lower bleachers.”

“I do think that leaves us a little bit of leeway,” he said.

Board Chair Ashley Ritchie brought up a concern about people sending her photos of spectators at football games not wearing masks, and she wanted to make sure that wasn’t going to be the case for other sports. She wanted to know if school resource officers were responsible for enforcing the mask order.

Keene said the SROs would prefer to get involved only if someone was “digging in heels” and refusing to wear masks, but otherwise, it was the responsibility of other district staff.

“I don’t know that we can make sure it’s not an issue,” Keene said, but he added that “we’ve never had anyone refuse to put one on once we’ve asked them to put it on.”

Member Bill Taulbee asked if the district should rely on the Health Department’s data, which is more current than the state’s, as to whether Clark County is in the “red zone” of coronavirus cases numbers in deciding whether to cancel sporting events. Keene said he was open to that.

Also during the meeting, Hisle had asked for a discussion about who has the authority to cancel or change athletic and extracurricular activities, because he was getting complaints about why the school board was allowing the superintendent to take emergency action to restrict activities because of the virus.

Thomas said there is a school board policy from 1994 that reflects a state regulation giving the superintendent the authority to call off school in the event of an emergency, whether that is a snowstorm or a virus outbreak or whatever.

Hisle said he only wanted an “informational” discussion, not board action on the current policy.

“I suppose if a board wanted to go rogue in the future, they could make radical changes to this policy and perhaps limit his ability to do that. I’m not suggesting that at this point in time,” Hisle said.