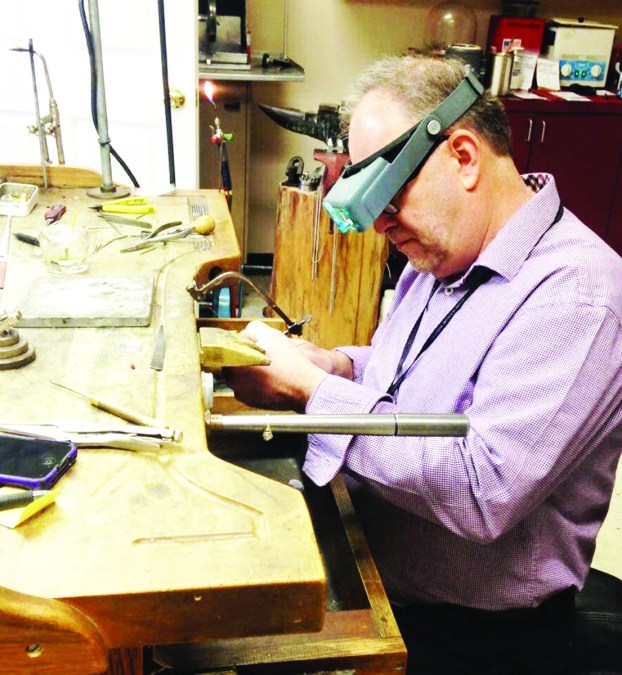 Berea College is known the world over for its artisans, and it was while he was a student there in the 1970s that David Gullett began his journey toward becoming a master jeweler. But his fascination with precious stones and metals may have started even earlier.

When he spoke with The Sun a couple of weeks ago, he was on a beach in South Carolina with Genell, his wife of 36 years, and they were planning to make their way up the coast to the Outer Banks and the Eastern Shore, then come back to Kentucky for a while and head out to Texas, the Dakotas and other Western states for a couple of months.

“We just barely got that store closed in time to leave,” Gullett said. “My wife is retired, and I was debt-free, and there was just no reason to work.”

But, oh, how he loved his work.

Gullett, 63, grew up in Wolfe County, where he attended a one-room school, the kind his mother taught in.

In 1977, he went to Berea, where he studied geology and earth science and worked in the college’s labor program as a lapidary, one who shapes stones such as agate into decorative pieces. He became supervisor of the other students, and after graduation, honed his skills at a jewelry school in Alabama. He then came back to Kentucky and worked for Gold Rush Jewelers in the old Lexington Mall for several years.

He then became an independent contractor for Keith’s in Winchester and other jewelers around the Bluegrass before deciding to open his own store.

“I did it all. Basic simple repairs, custom designing, casting … mold making, plating, appraisals, watch repair. I was the only craftsman in the county,” he said.

Most local jewelers, he explained, send jewelry off to have work done. He did it himself.

Gullett said he would have people come into his store wanting him to identify a stone. They would tell him they had already taken it to one jeweler or another.

“And now you’re here, and you still don’t know what it is. I’m not only going to tell you, I’m going to show you, and I don’t care what the next 99 people say, I’m still right,” he would say.

He did that for free for a long time, but eventually he realized his “expert opinion,” like that of a doctor or lawyer, was “worth something.”

Perhaps surprisingly, what Gullett liked best about his profession wasn’t just working with diamonds and rubies, silver and gold, but working with people.

“So many jewelers are not people people,” Gullett said. “They sit in the back, they do good work, but they can’t talk to people — and I’m comfortable with being out front.”

That’s a part of his work he’s going to miss now that he’s retired, but he isn’t quitting completely.

“I don’t want to abandon my skills,” he said.

He said he has several jewelry stores who will have him come and work on a diamond rather pay hundreds of dollars to insure it and send it off.

Besides working when he wants and traveling with Genell when he doesn’t, Gullett will also be able to spend time with his family. He has a daughter in Corpus Christi who is married to a Navy pilot, and he’s going to be a grandfather in a couple of months.

For this master jeweler, retirement is shaping up to be a gem.