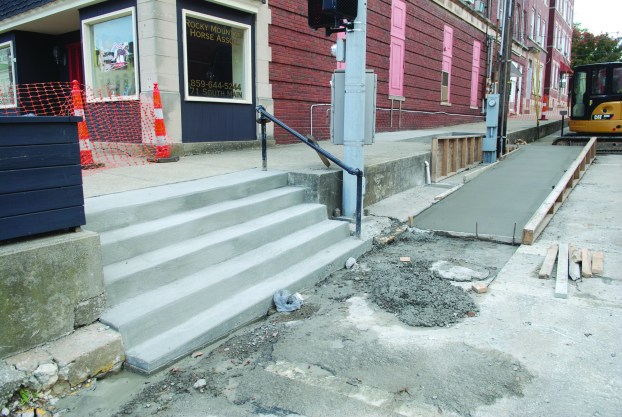 Workers poured this new handicapped-accessible ramp at the intersection of Main Street and Lexington Avenue this week as part of a project to repair and revamp some of the sidewalks in downtown Winchester. The city is spending $238,000 for sidewalk repairs this year. (Photo by Fred Petke)

Work on downtown Winchester’s crumbling sidewalks is moving ahead, with a goal of finishing by the end of the year, weather permitting.

Interim Winchester City Manager Mike Flynn said crews were pouring a handicap accessible ramp on the “high side” of the Main Street and Lexington Avenue this week. Other target areas include a ramp in front of the McEldowney Building on Cleveland Avenue, to replace crumbling steps, and a section across from the Clark County Courthouse.

Originally, the bids for the project came in at $298,000, but the Winchester Board of Commissioners voted to reduce the scope of work and bring the budget down to $238,000, Flynn said.

“This is probably phase one,” Flynn said. “We’ll do another phase next year. Hopefully, financially we’ll be stable and able to do one. What I’d like to see of (the commission) adopt some kind of sidewalk replacement program with funds set aside every year.”

Ordinarily, sidewalk maintenance is the responsibility of the property owner.

In the summer of 2019, the city assumed ownership of the sidewalks within the boundary of the downtown tax increment financing district. The TIF would invest part of the tax revenue from the district into the area. Property owners would still be responsible for removing snow and ice.

One of the unique features of the downtown sidewalks are the steps across from the courthouse. Flynn acknowledged they are not easy to navigate, even for the most able bodied.

“We’ve been in discussion with the state highway department about some of the crossings,” Flynn said. “Based on those discussions, what the state decides will determine what happens on the high side.”