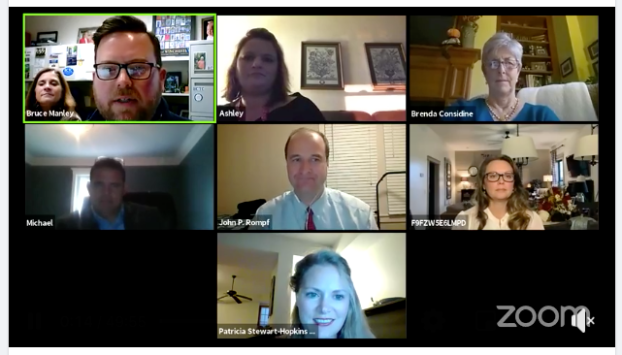 When and how students and teachers should return to their classrooms during the coronavirus pandemic was one of the questions candidates for the Clark County Board of Education were asked to give their views on during an hour-long virtual forum Tuesday.

The Zoom discussion, which featured all candidates for Districts 2 and 5, was hosted by Bluegrass Community and Technical College, radio station WWKY and the Winchester-Clark County Chamber of Commerce, and was shown both live and recorded on the chamber’s Facebook page.

Bruce Manley, director of BCTC’s Winchester campus, moderated the forum and was assisted by Cindy Banks, the chamber’s executive director.

Manley introduced the first question by saying that, in dealing with how to educate students during the COVID-19 outbreak, there seemed to be “two different conflicting priorities: what teachers want and what parents want.”

“What are your priorities for instruction to make sure everyone is safe, and what is the best learning outcome for the students?”

Board Chair Ashley Ritchie and her challenger for the District 5 seat, write-in candidate Mike Cecil, both pushed back against the moderator’s premise.

“I don’t think at all that they want two different things,” Ritchie said. “The students and the teachers all want the same thing. It’s just a matter of when and how we can make this happen safely.”

This year has been hard for teachers, Ritchie said, especially those for whom teaching by distance learning is “something new.”

But it has to be done in a way to protect students and employees.

“We are working on that daily,” she said, mentioning the work of the superintendent’s task force that includes a pediatrician, public health representative and parents.

One of the challenges of having all the students return at the same time to in-person learning is that they need to be separated by a distance of at least six feet, and not all classrooms are the same size. Some may only be able to accommodate eight students with the social distancing requirements, which is why the plan for students when they return to schools on Oct. 30, is to have half of the students come on Mondays and Tuesdays and the other half on Thursdays and Fridays, with Wednesdays being used for teacher planning and students studying at home.

Ritchie said that more and more students who need extra help are being brought into the schools now, and the number is growing. In the past two weeks, she said, more than 2,600 students had attended in-person instruction.

“We are truly in unprecedented times,” Cecil said. “I really do feel there is not necessarily a conflict between what teachers want and what parents want. I think what the school system should provide everyone, whether they’re employees or students, is choice.”

Some teachers and parents have serious concerns about exposing themselves or vulnerable family members to risk, and “that should not be taken lightly,” he said. But there are others, including some who “have already had COVID,” that would like to go back to in-person, and they should have that choice, he said.

Cecil suggested a survey at the beginning of each nine weeks asking parents and employees whether they want to opt for virtual or in-person.

“Let families decide what’s in their own best interest,” and come up with a plan to make that possible and see “how many teachers we have who want to come in.”

If there isn’t enough classroom space for social distancing, he said, schools can use gyms, cafeterias and foyers for instruction space.

In the District 2 race, there are three candidates for the board seat being vacated by Scott Hisle.

Candidates were interviewed in the order that their names appear on the ballot.

Brenda Considine said that in making decisions about bringing students and employees back into the buildings, “we have to look at the data. We have to really determine when we can make it as safe as possible for the staff and for the students.”

“We know that students need that face-to-face, but we’re also worried” about their safety, Considine said.

“We’re all going to eventually come out of it, but it’s going to affect us all in the long run, and the group that will be affected the most is our students,” she said.

But students or staff who get the potentially deadly virus could infect parents, grandparents and others, so it’s important for board members to look at all that to determine what the best decision would be, she said.

“I think we need to look at the quickest and safest measures that can be in place to allow for a return to in-person learning,” candidate Patricia Stewart-Hopkins said.

She said it’s important to understand that “the school district has responded and allowed for face-to-face instruction for those children who are having difficulty accessing the internet,” who have “unmet needs,” or are “falling behind.” And that experience with limited in-person instruction should offer school officials and administrators an opportunity to consider how well it is working and “look at where there may be room for change and planning,” and they can do the same by studying the outcomes of the A-B hybrid model that will be the next step in returning to in-person learning.

Heather Penichet said she wants to do “whatever it takes to get students back into the classroom as quickly as possible.”

“We have students in Clark County who are suffering and unable to learn in a virtual setting,” she said. “I think we need to make sacrifices as parents, community members, teachers and employees. We always need to put the children first.”

Penichet said she has seen how businesses and individuals have adapted “to be able to function and still be safe,” and schools should be able to do so.

The second question candidates were asked was what is their definition of success for graduating students, and “what do we do better to get them ready for life?”

Penichet shared her personal experience of having three sons with different personalities and career interests. One son, she said, wanted to go to college so he could play football. Another had no interest in college but wanted to be a welder, became certified through the district’s Area Technology Center and has been successful. Her youngest, she said, is a freshman at the University of Kentucky and aspires to be a doctor.

“Their success is based on what their goals are and what it takes to reach them. Everybody is different,” she said.

“Every child has a dream. It’s our job,” she said, to implement plans that will “give them results.”

“My definition of student success after graduation is being ready for the job market,” she said.

For students who are college-bound, the schools need to get them ready for college, but if they’re going into a career that doesn’t require a four-year degree, then “we need to make sure we put those learning experiences in early for them,” she said. “They need to be experiencing that at the middle school as they transition into high school.

“I think it’s important that we give students credit for understanding themselves, and I think that in doing so, we will find better outcomes in their choice as far as a college major or a career that meets their interests. I think we can do more to foster creativity. We can do more to encourage critical thinking,” she said.

“I think we have to realize that some kids aren’t going to college … and that’s OK,” she said. “We need to accept that and guide them and get them prepared for whatever they want. We just need to be supportive.”

Cecil said he thinks the best definition of success is “helping people develop into the best version of themselves.”

“We’re all given different talents and abilities, and maximizing those God-given gifts is really what success is,” he said.