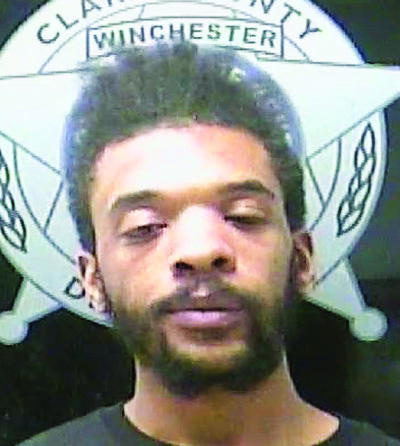 Police arrested a Winchester man Saturday after he allegedly hit a woman in the face with a rock and then broke into her apartment the following day.

Zaire Kadeem Dudley, 26, of Denny Avenue, was arrested Saturday on Oxford Drive on a warrant for second-degree assault and second-degree burglary and charges of first-degree criminal trespass and resisting arrest.

The assault and burglary offenses reportedly occurred earlier this month at the victim’s residence on Oxford Drive. According to the arrest warrant, Winchester Police officers responded to the residence for an assault call on Oct. 1, after the woman said Dudley threw a rock that struck her in the face. Officers said there was already swelling and a significant laceration to the woman’s face.

Officers followed up the next day. The woman told officers she went to Clark Regional Medical Center and was told her nose was broken.

She also said Dudley returned to her home on Oct. 2 and kicked in her front door. When she realized he was armed with “kitchen type” knives, she said, she called the police.

She also told officers Dudley assaulted her on June 23 when he reportedly punched her in the face and broke her eye socket. She said she didn’t think the injury was significant until the following day, when she went to the hospital.

In both incidents, she said Dudley accused her of cheating on him.

Dudley was lodged in the Clark County Detention Center.

Dudley has already served one prison sentence, after pleading guilty to second-degree assault in 2014. Dudley was sentenced to seven years in prison after robbing J.C. Young with Khamari Mundy. Police said Dudley had asked Young for a ride earlier in the day, and included Mundy. When they got in Young’s car, they assaulted Young until he stopped the car and jumped out. Dudley and Mundy robbed Young and fled on foot.