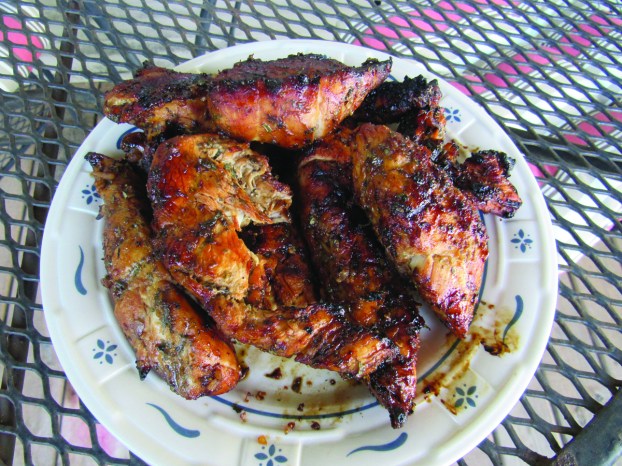 Nailed It or Failed It: Honey Lemon Chicken

In a bowl, combine the first 10 ingredients; mix well. Pour 2/3 cup marinade into a large resealable plastic bag; add the chicken. Seal bag and turn to coat; refrigerate for at least 4 hours or overnight. Cover and refrigerate the remaining marinade.

Today’s recipe was cut from the May-June 2003 issue of Quick Cooking magazine. The recipe was submitted to them by Tamara McFarlin from Mondovi, Wisconsin. McFarlin said the marinade recipe was invented by her 12-year-old daughter Amanda.

When searching though my chicken recipes, I’ve looked at this recipe numerous times. Because you have to let the meat marinate, I’ve passed it by for something faster to prepare.

It’s summertime and there’s nothing better than meat cooked on the grill, so it was time to give this recipe a try. I’ve tried gas grills, but I prefer charcoal by far.

Since the chicken needed to marinate, I prepped it the night before. Before going to work the next morning, I combined the first 10 ingredients listed on the recipe. I poured 2/3 cup of the marinade into a zippered bag and added the chicken. I zipped the bag and the gave the chicken a good massage, making sure every piece was well coated. I placed the bag in the refrigerator and headed to work.

By the time I got home, Brad had the grill going and we were ready to get the chicken on the grill.

We first placed the chicken directly over the hot coals and slathered some of the reserved marinade on it. After a few minutes, we added more.Then iIt was time to turn the chicken and marinade that side.

Our coals were pretty hot so the outside of the chicken was cooking faster than the center of the chicken. We moved the chicken off of the coals and placed the lid on the grill, lifting it occasionally to keep coating the chicken with marinade.

Always be careful with marinade. If you don’t watch carefully, it will char and you’ll end up with take-out for supper instead of home cooking.

The chicken was done and it was time to sit down at the table. We both dove into the chicken first thing. It had a great flavor and was done perfectly.

Brad’s getting very good at grilling now that he is retired.  He says the secret is to stay with the grill. I never do because I’m running inside trying to get the side dishes ready for the meal.

Brad and I really did enjoy this chicken. It was something we’ll definitely be having again during these warm days of summer and probably into the fall. The marinade recipe that Amanda came up with is a definite Nailed It and I’ll be adding it to my self-made cookbook.

I hope you’ll fire up the grill and give this recipe a try.

Sarah Condley is an amateur baker and chef who is compiling a cookbook of her favorite recipes.