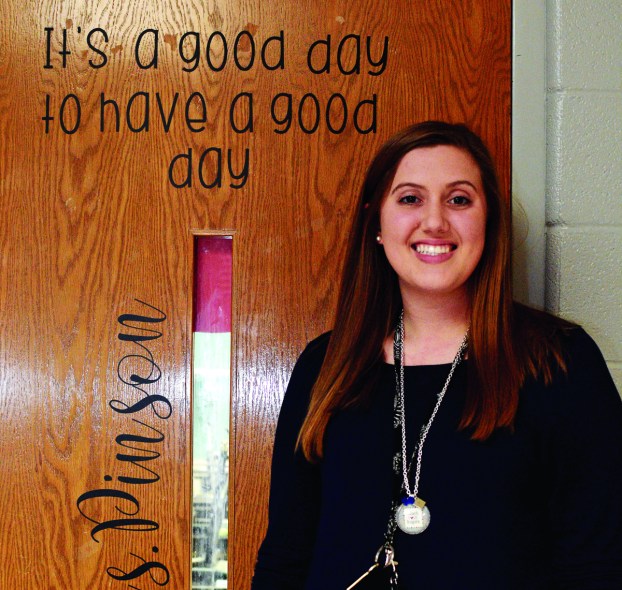 Taylor Pinson is a first year teacher at Baker Intermediate School. She graduated from the University of Kentucky in May and now teaches sixth grade math and science at BIS. (Photo by Lashana Harney)

Taylor Pinson’s degree is in elementary education, but by chance, she ended up teaching middle school students.

And now she can’t imagine being anywhere else.

“It’s one of those things,” Pinson said. “ … Honestly, I can’t imagine changing now. I like sixth grade.”

Pinson, a Franklin native, graduated from the University of Kentucky in May; she graduated early, attending UK for three years. She is a first-year teacher at Baker Intermediate School. There, she teaches sixth-grade math and science.

Pinson had always loved working with children. In high school, she was a baby sitter and worked at a Boys and Girls Club. She also worked as a tutor.

During her first semester of college, she wasn’t quite sure what to declare as her major. She considered the medical field, but after recalling her time at the Boys and Girls Club, she thought teaching may be her calling.

“Things worked out exactly how they needed to,” Pinson said.

Before interviewing for her job at Baker, Pinson had never been to Winchester before. But since coming here, she’s felt welcomed by her students, staff and the community.

“I’ve received such an outpouring of support,” Pinson said.

Over the year, Pinson will dive into a variety of topics such as fractions, ratios, percentages, analyzing numbers, Earth sciences, the scientific method and more. Pinson said she enjoys using real-world examples and engaging with her students.

She said her favorite part of teaching is her students.

“I feel like seeing their progress, even in such a short amount of time is tremendous,” Pinson said. “In the beginning, we do the same things over and over, and [the students] weren’t getting it at first, and now, I can see they get it, and it’s easy for them. And so just seeing that progress throughout has been good and rewarding.”

“I was nervous,” Pinson said. “But I was never alone, and then I felt very comforted in that support that I was getting.”

Pinson said there is a lot more to teaching than she had imagined.

“Even when I student taught, the other teacher took care of it,” she said. “I never had to think about it as far as just making sure that I kept that contact with parents and took some additional time that I hadn’t. I knew that was important, but like taking all of those steps, it’s more time consuming, but it’s also more rewarding because I know that impact is coming from me.”

It can be challenging, though, meeting all of the needs of every student.

“I see 90 kids a day,” Pinson said. “So trying to keep everyone, making sure everyone has all the support that they need.”

Despite the challenges, Pinson said she hopes to connect with all her students.

“I want them to remember me as caring, knowing that I to get to know them and cared about them,” she said.

As far as personal goals, Pinson said she hopes to continue to grow and learn so she can better meet the needs of her students. She said she also hopes to become more involved in the school and build relationships with fellow staff members. Pinson attributes much of her success to her supportive co-workers, including Lisa Antoniou, Chelsea Cummings and more.

In every aspect, Pinson plans to exude positivity.

She encourages aspiring teachers not to get discouraged by the naysayers and teaches her students always to do their best.

Pinson said she applies the same attitudes to her life. Her parents have always pushed her to do her best, and her fiance has been her cheerleader. But being a teacher at Baker has also impacted Pinson in many ways, even though she has only been teaching for a short time.

“I felt like it’s just opened my eyes to see a different community because I’m not from here,” Pinson said. “ … I feel like it’s allowed me to be more compassionate for my students, and seeing any struggles that they face as well. It’s also allowed me to be a good team player, especially here. We have a very team-like mentality.”