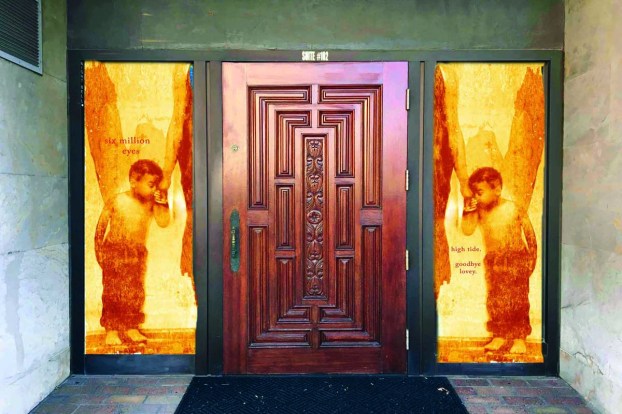 One of the project pieces is on display at a business on Short Street in Lexington.

African-American men and women were here, waiting to be bought and sold.

They were here — as mothers, daughters, sisters, brothers, fathers and sons — facing unspeakable horrors and stripped of their humanity.

They were here, a group of artists said, and they are reminding the public of just that.

“I Was Here” is an artistic collaboration between poet Nikky Finney, artist Marjorie Guyon and photographer Patrick J. Mitchell. The project is currently on display in the Cheapside neighborhood in Lexington.

The project is composed of 21 Ancestor Spirit Portraits and centers on the public square at Cheapside, which was one of the most sizable slave auction sites in the U.S.

It also references the Bight of Benin, the Igbo Landing on St. Simon’s Island, Georgia, the Broeck Race Course in Savannah as well as other physical locations central to the transatlantic Middle Passage slave trade, marked by longitude and latitude.

“This project seeks to begin the precious human work of looking at, looking behind and looking ahead,” Guyon said in the release.

The artists have recreated the original art pieces as roman shades that can be lowered at night to bring the “Ancestor Spirit Portraits” into view.

The faces and bodies of the nine models used by the artists are artistic representations of those unnamed ancestors.

“We believe at this time in all our lives, on this small corner of the earth, it is necessary to illuminate, as evocatively and powerfully as we know how, the living presence of the real humans who once stood waiting to be bought and sold and who faced unspeakable human crimes against their humanity,” Finney said in the release. “It is never too late to remember and honor a piece of the human puzzle that makes us who we are. ‘I Was Here’ honors that memory.”

Winchester resident and supporter of the project Syndy Deese said she is helping the artists bring the project to Winchester and other towns across America. The goal is to have the project in Winchester in spring 2019.

“The vibrancy of our downtown area has improved so much over the last five to seven years, and the idea of bringing the ‘I Was Here’ project to Winchester fits beautifully,” Deese said.

As a Clark County native that has relocated back to Winchester, Deese said she has become passionate about how people can invoke positive impact in the community.

“Those of us involved are looking at bringing the project to Winchester as the very first out-of-town, outdoor museum using these hauntingly beautiful ancestor portraits to stimulate a new conversation about who we were, who we are and who we could be as fellow citizens,” Deese said. “The project is not just centered on Lexington because of Cheapside but is a local project for all communities to touch the spirit of humanity in a way that has not been done before. It’s an outdoor museum for all to see.”

Deese said she also sees the project as an opportunity to continue the work of bridging the gap of the racial divide that exists in Clark County, similar to the work Better Together Winchester and others are doing.

“We are currently working on the logistics involved to install this work of art in Winchester,” Deese said. “Our hope is to have it finalized in the near future so our community can begin to experience the shift in spirit that is now occurring in Lexington because of the conversations the art has stimulated.”

Marjorie Guyon, an artist based in Lexington, has shown widely across the country, and Patrick Mitchell is a published award-winning photographer from New York now living in Lexington. Mitchell is also an actor and performed in “The Meeting” in February at Leeds Center of the Arts.

The exhibition is currently in the windows in the Cheapside neighborhood in Lexington, creating an outdoor museum open to all.

“Instead of putting into the most beautiful places where only certain people got to see it, what would happen if you turned your city into an exhibition,” Guyon said about the project’s accessibility.

Guyon said the idea for the project sprung out of conversations she had with a woman she met following the 2016 Election Day.

They discussed the divide in the country and what they could do to help shift the spirit of the country.

One day, while talking in Guyon’s studio, which overlooks Cheapside, Guyon spoke of an idea she had about a mother and child appearing and disappearing in the windows.

“And she said, ‘Well, that is the story of the African-American woman. We’re invisible,’” Guyon said.

Guyon photographed the lady and her son, and after looking at the images, she realized there was a more profound project at play.

From there, the idea for “I Was Here” was born.

Large-scale renditions of the Ancestor Spirit Portraits, integrated with Finney’s poetic language, are installed in select windows and doorways that surround the Old Courthouse in Lexington. Each business owner has become a docent, informing their customers or clients about the art in their windows — taking away the formality of a museum tour guide and replacing it with a peer capable of igniting intimate dialogue.

“One of the neatest things I’ve gotten out of this project is these images these artists created almost because of a spirit of the pieces gives you permission to have dialogue and discussion around a subject that’s a difficult subject,” Deese said.

Deese said the same would be replicated in downtown Winchester.

Guyon said she hopes the exhibition creates a new model for how people see one another. She said it would touch each person differently but hopefully serves as a way to reflect and move forward to make the world a more positive place.

And while the project has taken a significant amount of coordination and collaboration among many people throughout several months, the spirit of the project has always been within them.

“We’ve been working on it all of our lives,” Guyon said. “We are just people who are looking to make the world better.”