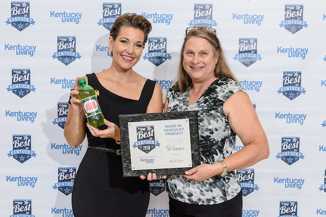 The awards were chosen by Kentucky Living magazine readers, according to a news release. Readers voted on KentuckyLiving.com to select winners from all over Kentucky, representing nearly every region of the Commonwealth.

Other nearby winners include a renovation project in downtown Mt Sterling. The project won the Governor Matt Bevin’s ‘Beautify the Bluegrass’ campaign, a partnership with Kentucky Living to encourage Kentuckians to enhance and improve their local communities.

Published monthly by the Kentucky Association of Electric Cooperatives, Kentucky Living’s mission is to create a community of people who take pride in themselves as Kentuckians and to improve their quality of life, according to the release.

“We love Kentucky,” Joe Arnold, KAEC Vice President of Communications, said. “These awards are a terrific partnership with our amazing readers to celebrate and support the Commonwealth.”