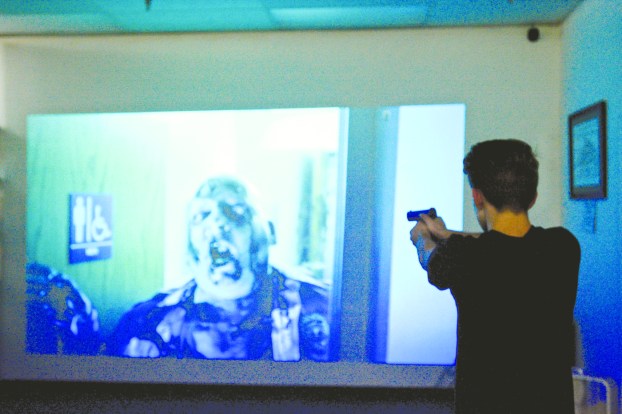 Grissom Yates demonstrates the zombie scenario of the 225 different situations on the tactical simulator now offered at Major Dads. (Photo by Lashana Harney)

For people who want to battle zombies, practice shooting targets or even train for emergency situations, Major Dads is offering a fun, safe way to do so.

Business owners Greg and Denise Yates said they made the tactical simulator available to the public in June.

People of all ages can come in and choose to play or train from more than 225 different scenarios including bottle target practice, battling zombies, fighting balloon animals, shoot/don’t shoot situations, carnival games, attempted muggings and more.

Denise started researching various ways to bring more people into the military store last fall and after learning more about the tactical simulator, thought it would be fun to try.

“They can either come in and take a chance that no one’s playing on it, or they can call ahead and reserve a time,” Denise said.

Greg said the tactical simulator is also portable, so it can travel to various locations for parties or for businesses to train their staff or team building exercises. The simulator will be available for use in addition to Major Dad’s regular hours.

The cost varies for the amount of time. The basic package includes one laser SIRT pistol per person. Denise said the pistol is realistic — it feels heavy and its magazine pops out like a real gun.

“It’s realistic, but it is (a laser gun),” she said. “So you have no fear of hurting anybody or yourself, so it kind of takes that fear factor out.”

Major Dads will also offer classes with the simulator. Its first class, beginners defensive training, will be 6-8 p.m. July 17. The cost is $50 per student. The course will go over an introduction to the handgun, weapons cleaning demonstration, field stripping, sight adjustments, proper grip and stance, target acquisition, carry methods and skill building methods.

“For someone who’s unsure or never really shot a lot of guns, doing this can make you feel more comfortable,” Denise said.

In shoot/don’t shoot scenarios, Denise said the simulator gives people a better perspective on what trained police officers endure in the field.

“When I did the police academy thing when (the tactical simulator) first got here,  I’m thinking how realistic can it be?” she said. “It’s on a screen. What’s the big deal? … But you’re trying to decide are they going to pull out a wallet, phone or shoot me. Which is it?

“So you can understand what the military or the police or security, whoever’s in this position, do I take a chance and risk shooting an innocent or am I shooting somebody who’s going to shoot me and kill me?”

Denise said not only does the gun feel realistic but so do the situations on the screen. She said that’s what makes it such an excellent tool for training as well as a fun, new game for families.

“It’s just really amazing,” she said. “And actually, scary. My hands are sweaty. Your heart does start pumping.”